Framed – The Many Crimes of Charlie Johns

Most Corrupt Council in NSW Australia... supporting their Zionist families and friends... they all cover each others backside...all the way up to the Federal Government.
Post Reply
1 post • Page 1 of 1

Framed – The Many Crimes of Charlie Johns

Framed – The Many Crimes of Charlie Johns
Now that we’re starting to see how throughly corrupt the council is (even though it’s early days yet), it’s time to start properly exposing the Bowral Mafia.

The biggest of the crooks was Charlie Johns. Nowadays I call him the “dead criminal”.
In fact, I was forbidden from calling Charlie a criminal for the last 18 months of his life, after he had me stitched up with a fabricated AVO. Charlie and his dodgy copper mates had falsely charged me with stalking and intimidation back in 2018, along with a fraudulent Apprehended Violence Order. I ended up losing the criminal case because of police corruption and a couple of dirty magistrates. Plus I copped the two-year AVO.

I wasn’t too happy about that at all, so once the case was over, I started uploading evidence of Charlie Johns’ long-term corruption accompanied by stories of his criminality.
The content is still on my Facebook page to this day.

So anyway, Charlie and the cops freaked out cause they thought the court case was the end of me calling him out as a crim. I soon received a summons to appear before one of the dirty magistrates. It was something to do with the AVO. On the day of the court appearance, the prosecutor told the court that Charlie was fearful of his safety because Adam Greenwood was calling him a criminal on social media (with evidence, of course). He made a statement that Adam Greenwood’s false accusations were causing him mental anguish. The prosecution then asked the magistrate for a condition added to the AVO – that Adam Greenwood was prohibited from talking about Charlie Johns on Facebook whether good or bad.

I went off my head. I railed against a dirty police division fully of bent cops. I told the prosecutor he was criminal to his face. And I let the magistrate know – in no uncertain terms – that Charlie Johns had framed me for a crime I didn’t commit based on false and misleading statements while being fully supported by a bent chief inspector and two bent senior sergeants.
Ignoring anything I had to say, the magistrate granted the prosecution’s application, and I was once again stitched up by crooked cops and dodgy court officials.

The reason Charlie and the bent cops had me framed in the first place is really the crux of the story. I’d uncovered overwhelming evidence from numerous sources that Charlie had stolen $25,000 from the Wingecarribee Shire Council. But it gets worse. The theft was constantly being raised in council meetings with motions from certain councillors calling for a full investigation. But Charlie had four of the councillors in his pocket. And get this, Charlie was the campaign manager for the very same councillors!

In fact, the theft of that twenty-five thousand dollars kept coming before council over the four years council term!
And for those four years, the four crooked councillors who Charlie helped get elected, kept voting against any investigation into the fraud. And every single time they voted in favour of covering up the theft, they failed to tell the council and the community that Charlie Johns was their campaign manager. For four fucking years.

In the end, Charlie got away with the theft, and he went on to support other crooked candidates in a number of council elections over the following decade. Some of the crooked councillors he helped win office are amongst the councillors who were recently sacked.
As it turns out, the four councillors Charlie represented as campaign manager were forbidden from voting when it came to Charlie’s theft of $25K (and the numerous attempts to hold him accountable via motions before council). Their relationship with Charlie was a major conflict of interest.

If the theft of the money had been properly investigated, Charlie would’ve been finished. He would’ve been charged and convicted for defrauding the council out of tens of thousands of dollars.
But because Charlie was never exposed for what he actually was – a common criminal – he lived to see another day as a crook.
In fact, he committed crimes over the following decade.

When I confronted Charlie about the theft from council back in 2018, he knew it could sink him. That’s why he called on some dirty cops to stitch me up on bogus charges.
After all, Charlie was the right hand man of one of the crooked councillors, and this councillor had been paying off the bent coppers on a regular basis.
It was time for the councillor to call in a favour or two.
And suddenly I was framed for a crime I didn’t commit. 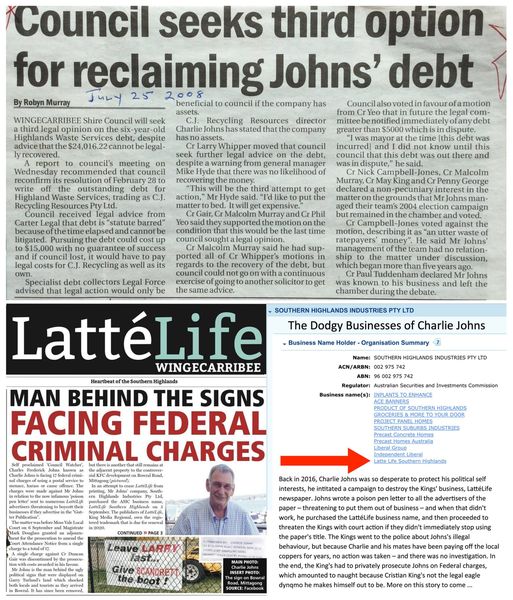