One of the most senior managers at Wingecarribee Shire Council abused the hell out of me in 2019.

Mark Pepping had never been properly scrutinised, nor had he had his picture taken by a qualified investigative journalist.

He’s was as arrogant and entitled as Barry Paull is nowadays, so when I rocked up to take his photo a couple of years ago, he went beserk.

He even encouraged a biker looking dude to remove me from the vicinity.

When the 120 kilo man attempted to menace me, I stood my ground and said, “Do your best."

Like most bullies you stand up to, he backed down immediately. It was all just bluff and bluster 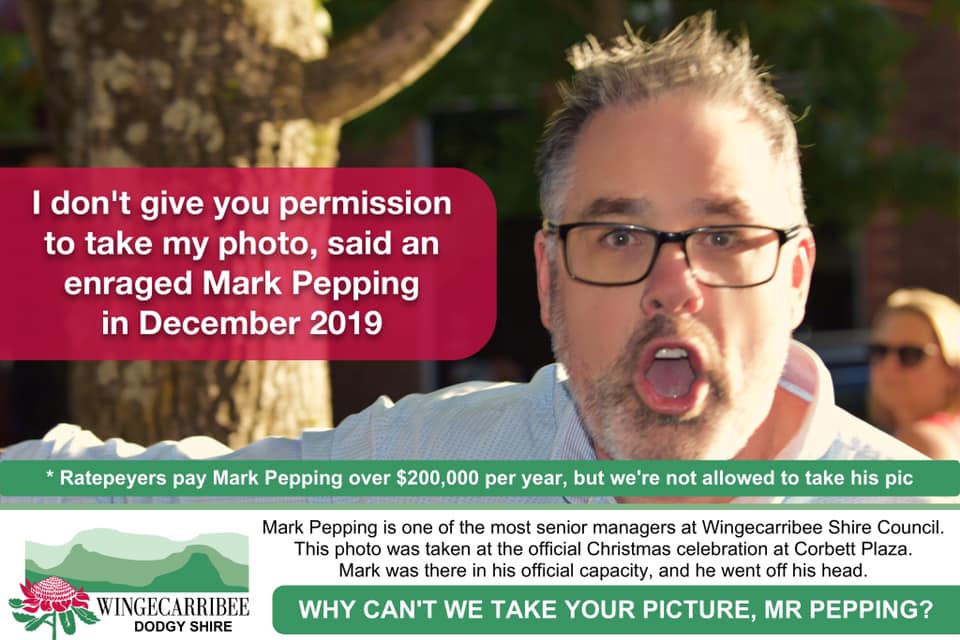 Re: Mark Pepping had never been properly scrutinised

OVER PEPPING THE MARK

In last week's Southern Highland Express, the editor chose to publish a fluff piece about one of the former senior managers at Wingecarribee Shire Council. The former manager is a crook and he's currently under investigation by the Public Inquiry. Earlier this year he was forced to resign due to long-term corruption.

The Express article conveniently glosses over the fact that Mark Pepping is crooked. The author, Mark Wallace, paints Pepping as an honest and upstanding citizen who just happens to be starting a new career in the private sector.

The author has been deceived, and in all likelihood, the article is a paid editorial.
In fact, in late 2020, the same paper wrote a scathing article about council, identifying Mark Pepping as a corrupt senior manager.
In that report, the paper was absolutely correct.

I've just written to all the directors of Mark Pepping's new employer, Zone Planning Group (ZPG).
I've told the senior managers of the firm that Mark Pepping is a criminal. I've also encouraged the managers to check my Facebook pages to confirm I've been exposing Pepping for corruption for the last three years.

Here's the email/comment to the ZPG directors –

To the directors –
Your recent addition to the ZPG team is a criminal.
Mark Pepping is currently under investigation by a Public Inquiry into the most corrupt council in the history of NSW, Wingecarribee Shire Council.

My life was destroyed by Mark Pepping and his fellow council crooks, and I’ve been left destitute by this criminal’s actions in covering up long-term entrenched corruption which I exposed as a journalist.
Mark Pepping is going to jail.

I’ll be personally making sure that every company that employs this criminal is made aware of his crooked history, and I will not rest until Pepping is charged, convicted and incarcerated.

While he continues to work for ZPG, I’ll be exposing your company as an organisation that hires criminals.

I encourage you to check out my Facebook pages Adz Nauseam and Defying Defamation in which I’ve called out Pepping as a crook numerous times in the past. The posts are still online to this day.

I’ve been exposing Pepping as a criminal in the public domain for over three years, and at no stage has this crook every challenged my allegations. I’ve never received a cease and desist letter from him, and he’s never threatened me with defamation action. The reason he hasn’t initiated litigation against me is because he’s corrupt and because what I’m saying is true.

I’ve confronted Pepping in public with allegations of his corruption, as is my right as a journalist and whistleblower.

On the first occasion, he called the police and complained he didn’t give me permission to take his photo. The police arrived and there was nothing they could do.

I’m legally allowed to take pictures of people in the public domain.
On the second occasion, I took Pepping’s photo in public and he verbally abused and threatened me. I’ve got photographic evidence of that abuse.

Mark Pepping was forced to resign from Wingecarribee Council due to long-term corruption as a senior manager. If he hadn’t’ve resigned, he would’ve been sacked.

I’m not sure how ZPG has employed this criminal. A simple Google search would have exposed him for his long-term corruption and the fact he’s the subject of a public inquiry. During the vocal submissions of the inquiry, Pepping will be called as a witness, and this will bring ZPG into disrepute.

Furthermore, while Pepping’s working for ZPG, he’ll be calling on his criminal contacts who formerly worked at Wingecarribee Shire Council, and he’ll be asking for their support with his new career in the private sector.

I would encourage the owners of ZPG to make proper inquiries into Pepping’s past before his criminal history is fully exposed and your company is held up to ridicule and shame.

Please find attached news report that showcases Pepping’s corruption. Pepping was part of a criminal conspiracy in which a crooked councillor had illegal contact with a corrupt developer. Pepping was obligated to report such conduct, but he never did. As a senior manager at council at the time, he was obligated by law to report the corruption after it came to light. Pepping finally spoke about the corruption, but only when forced to answer questions under oath as part of a civil trial.

I guarantee that as a member of Zone Planning Group, Mark Pepping will commit crimes. He’s been acting criminally for years.
I can be contacted for further information on 0409 871 763.

Please feel free to call me anytime, and I’ll give you a comprehensive history of Pepping’s corruption, and that of the council.
Signed,
Adam Greenwood
Ph: 0409 871 763 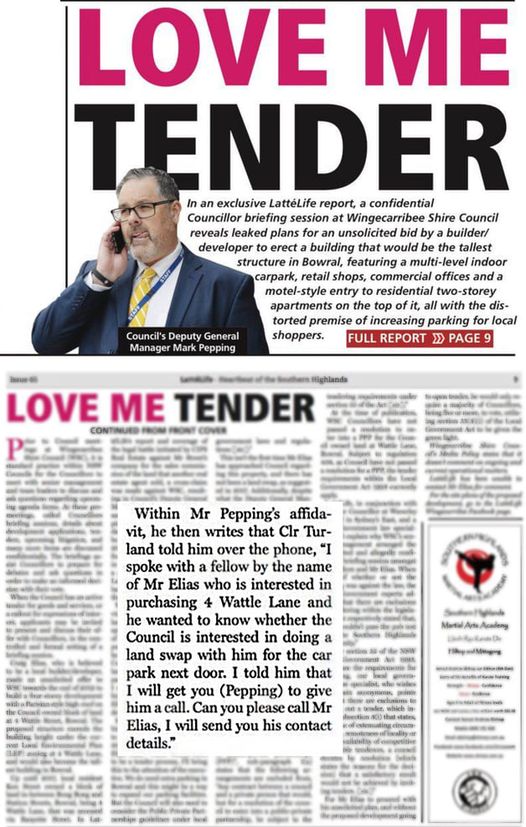 Re: Mark Pepping had never been properly scrutinised

It’s a rare occurrence when NSW council’s are placed into administration. The State Government only ever decides on a council being sacked when there’s overwhelming and undeniable evidence of corruption and maladministration.

It’s an even rarer occurrence when a council becomes the subject of a Public Inquiry.

A Public Inquiry is the equivalent to a regional Royal Commission.

The NSW Minister for Local Government has decreed that Wingecarribee Shire Council be fully investigated by the Commissioner of a Public Inquiry.

I can confirm the minister made the decision to sack the council based on irrefutable evidence of corruption, because I was one of the community members who supplied Ms Hancock with the proof. I personally submitted hundreds of evidentiary documents that showcase decades of malfeasance. I’m now in the process of submitting the same evidence to the commissioner, along with thousands of other documents.

In the attached meme, Mark Pepping makes the ridiculous assertion that the sacking of the council is a storm in a tea cup. He states that nothing will come of the public inquiry because of “personality clashes”.

The minister has decided on a Public Inquiry because the Wingecarribee Shire Council was being run by a bunch of crooked councillors and senior managers, all of whom have either been sacked or forced to resign.

Mark Pepping lied to the Goulburn Express when he stated the public inquiry was just a storm in a tea cup. It’s not, and the commissioner’s report will expose widespread entrenched corruption dating back two decades. If Pepping has so blatantly lied to the Express, then he’s also lied to Zone Planning Group when applying for a job with your organisation. He’s minimised his role in Australia’s most corrupt council of all time.
Do you really want a liar and a fraud on your team?

Is this fair on your other team members – honest, upstanding architects and town planners, people who are of the highest integrity?
Do you really want a former crooked senior manager at WSC possibly engaging in criminal acts, thereby bringing your organisation into disrepute?

Please don’t take my word for it. Have the board of directors make their own inquiries.
Even the most cursory of investigations will prove that Mark Pepping is a crook.

I encourage you to protect the reputation of your business by checking out Pepping’s bona fides.

By the way, the only reason council officials are corrupt is because they receive kickbacks, which is theft. 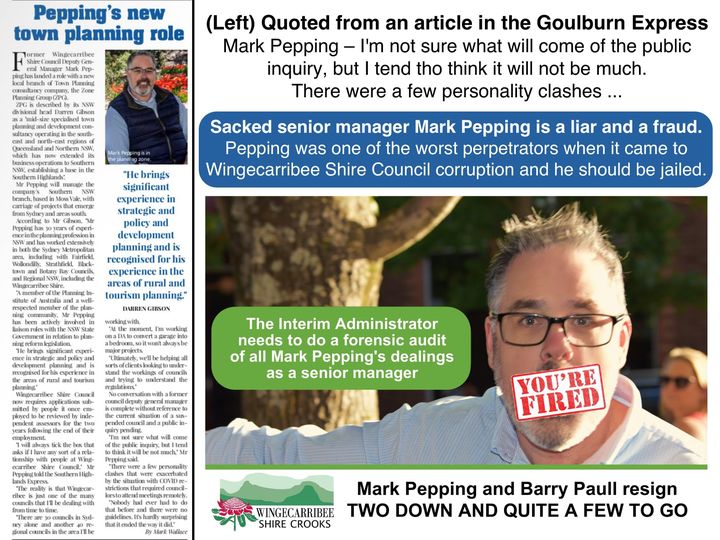