Highlands FM being looted by ✡ crooks

Highlands FM being looted by ✡ crooks

All is not well in Utopia despite assurances to the contrary.

And in an attempt to fill the depleted coffers, the Board of Directors is doing what it does best – attempting to gain a financial advantage from the community, by deception......and its not even their community!

A recent application to IMB for a substantial grant is fraudulent.

The submission calls upon the bank’s Community Grant scheme to provide money to Highland FM for a brand new Outside Broadcasting system......... when the Station already has one in perfect working order.

Known as the OB, the equipment is rarely used – maybe two to three times a year – and the only presenter using it is the totally incompetent Station Manager, John Hibberd. A recent outside broadcast by Hibberd at the Moss Vale Show was a disaster, as it always is when he's at the helm.

In 2012, Highland FM applied for a grant from the Federal Government for a new website, and the successful application was a windfall for the Station....... it received $30,000.

For five long years, the money was squandered on day-to-day expenses, while the station continued to use the old website that was antiquated and obsolete.

The $30,000 grant was never recorded in the financial minutes of the organisation, and when the non Highlands resident but still Chair of the Board,at the time, Carolyn Beaumont, was confronted about where the money had gone, she made this ridiculous statement –

“We did get a number of people in to build the website over the last five years, but they failed every time, and we had to start all over again”.

When questioned as to why the payments to these alleged website builders hadn’t been included in the financial statements at any of the AGMs from 2012 to 2017, Beaumont held herself up to further ridicule by stating, “All the payments were under $1000, and the Board has no obligation to declare any outgoing payments of less than $1000.”

Beaumont would have the membership believe that the Board of Directors engaged website builders 30 times over the ensuing years, all of whom failed in providing a new website for the Station. In fact, when a new website was finally produced in late 2017, it’s estimated that Highland FM paid as little as $500 for the construction.

What happened to the other $29,500 is anyone’s guess. And when confronted about the missing money, the Board of Directors simply ignore any of the members who inquire.

What an irony this is...there are about 80 active presenters on air in any given week. We estimate each one brings an audience of perhaps 10 people.

We invite the Board to produce any credible evidence to prove us wrong and demonstrate what they claim is the regular audience.

In 30 years of "broadcasting" there has never been a proper audit of listeners.

Highland FM is really just a vehicle for a bunch of people to delude and big note themselves to anyone who will listen. The "management", such as it is, want to assert their authority as experts, while the presenters (in the main) want to boast they are real live radio personalities....movers and shakers in the community.

The truth is, without any training whatsoever nor any experience in Radio, most are totally incompetent and produce the most horrible radio imaginable.

We say its the 80/20 principle in play....20% are competent, intelligent, sincerely committed members, genuinely wishing to help the community.

The application for the IMB grant is a disgrace....and arguably a criminal offence. Namely "attempt to gain a financial advantage by deception".

The bank’s Community Grant’s scheme is based in the Illawarra and the Highlands community should not be begging for alms from a nearby region.

This is shameful and unnecessary and all Highlanders should find this story bemusing...to put it mildly.

Indeed, one of the objectives of the IMB Community Grant’s scheme is to –

"Identify and support activities that encourage self-sufficiency through (the) transfer of skills and knowledge; and (which) may develop new physical resources. "

Part of the criteria for an IMB grant includes –

The IMB Community Foundation will not fund the following:

IMB grants must be used for the express purpose outlined in the application for donated monies.

Highland FM has a well documented history of accepting grant money and using it solely for the day-to-day running of the organisation.

In conclusion, Highland FM is a community organisation that is beset by entrenched corruption and institutionalized abuse. Dozens of members who have spoken out about these issues have either been illegally ejected from the station, or demonized to the point they just leave due to bullying and intimidation.

Regulatory bodies at a State and Federal level have been notified about the corrupt management and Directors, but as is often the case in a wide spectrum of activities, they have been negligent in their oversight duties.

Even the exposure of a pedophile on the board (and his subsequent conviction and incarceration), have not prompted a proper and thorough Police investigation about other abuse and corruption at the Station. Indeed, the Board of Directors did everything in their power to cover-up the pedophile’s abuse, and for years after being charged, members were kept in the dark about children of presenters being sexually assaulted.

Based on years of entrenched corruption, Highland FM, fails every criteria for receiving a grant from the IMB Community Foundation.

There’s so many other legitimate organisation who could use an IMB grant and put it to good use, whereas, Highland FM will use utilise any donated money to continue skating by.

If the 80/20 factor holds true as above, then about 20 current members should denounce this latest Fawlty Towers moment and tell their Board to pull out of the application.

The other 80 members will do what they always do....nothing...except for presenting their "show"...to about 100 people.

Lets hope that IMB find this to be interesting reading. 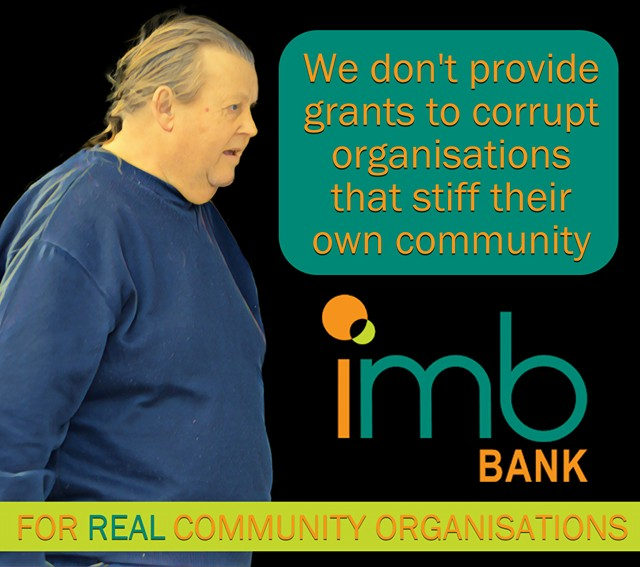