To the Commissioner,
Submission to Inquiry – 002

In the lead up to the 2016 council elections, Wingecarribee Shire councillor, Garry Turland, was getting desperate. Turland had received a barrage of bad publicity in the preceding months, with the fledgling LattéLife newspaper publishing numerous articles that painted him in a really bad light.
The reports literally called him corrupt, but without actually saying so.

The publishers had received a number of threats from Turland’s crooked solicitor, Malcolm Murray, to cease and desist, but the paper wasn’t actually printing anything defamatory, it was just bad press on Garry’s part.

The elections were just days away when Turland’s trusty sidekick came up with one of his dirtiest tricks to date. Charlie Johns had stumbled on to the fact the publishers of LattéLife had failed to renew their business name – LattéLife Southern Highlands.
So Charlie purchased the business name on the spot.
Garry was ecstatic.

Just days before polling, LattéLife was about to publish their special election edition, and Turland had been expecting the paper to crucify him in print. As a developer, Garry was desperate to be re-elected, his business depended on it.

So Charlie sent the LattéLife publishers a very stern email. “I now own your business name,” he said, with menace. “Do not publish the next edition of your paper or I will sue you for substantial damages.”

The LattéLife owners went ahead and published anyway. They still owned the trademark.
Charlie’s attempt to shut down the local media had been thwarted.

Garry Turland was still re-elected in the end, but only by the skin of his teeth. He had the least votes and preferences of all nine successful council candidates.
I was working for LattéLife when Charlie was trying to shut down the paper prior to the election. Out of sheer frustration, I produced the attached parody – Turland Times. I posted it to my Facebook page.
Within 24 hours, Charlie Johns had sent me a threat of defamation.

After reading the defamation threat, I had a good laugh, and promptly ignored it.
A few days after the election, I wrote the now infamous song, The Strife and Crimes of Duncan Gair.

Because I’d ignored Charlie’s threat of litigation, the crooks knew that this time they’d have to shut me down with proper defamation proceedings. So they got their crooked solicitor, Malcolm Murray, to initiate the action in the Supreme Court of NSW.
The case lasted 5 years and caused the council to be placed into administration.

Twelve months before the case was found against me, the plaintiffs, Gair and Turland, had a major falling out. Turland wanted to stop the defamation action because he knew there could me major ramifications if they won the case, having destroyed my life and sent me broke.

Gair, on the hand, was adamant the case should go ahead. Duncan knew that stopping the litigation would expose the plaintiffs as corrupt councillors using the courts as a weapon to silence a journalist.
This caused a major rift between Gair and Turland.

The falling out extended to council meetings, and also in the media. The bickering got so bad, the Minister for Local Government was forced to issue the council with a Performance Improvement Order.

The two councillors continued to fight and argue in the public domain, and this forced the minister to place the council into administration.
The now ex-councillors are both subjects of a public inquiry. 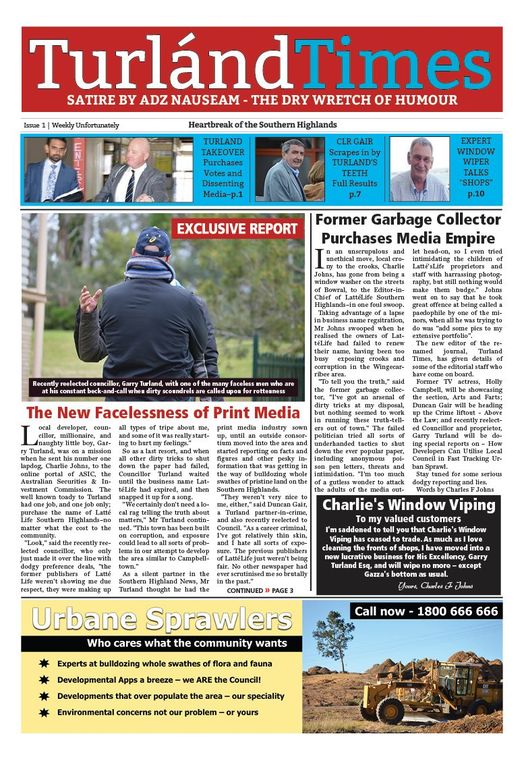