There’s now overwhelming evidence that proves the relationship between Duncan Gair and the Sowter family was illegal.
That’s why Gair had to keep the connection a secret for over ten years.

Duncan never told the community that Jock Sowter was his campaign manager at the 2012 and 2016 elections.
If Mayor Gair ever declared the Sowter family as a conflict, he would’ve been forbidden from voting in favour of the Sowter’s Coomungie development.

These kickbacks are just the tip of the iceberg.

In the meantime, Councillor Gair kept Jock Sowter’s role in his election campaign a deep, dark secret.
But when it came to suing me for defamation, Duncan was happy to use Jock as a witness for the prosecution.

And even though Gair sued me for calling him a crooked councillor, he ended up suing me as a private citizen.
Duncan always liked to have it both ways.

When it came to using the son of a developer as his campaign manager, he didn’t feel the need to declare such a major conflict.
But when it came to suing me in the Supreme Court of NSW, suddenly he’s willing to declare Jock Sowter as a witness for the prosecution.

And during the five years Gair sued me for libel, he never once declared the litigation as a major conflict of interest.
He kept the Supreme Court action a deep, dark secret.

Just like he kept his link to the Sowter family a deep, dark secret.
The name of Jock Sowter’s 2016 campaign was “Keep Duncan Gair There”.

The alternative name could’ve been “Keep Duncan Gair There Until We Sell Our Property to Chinese Developers for eighty-million bucks!”
Signed,
Adam Greenwood
Ph: 0409 871 763 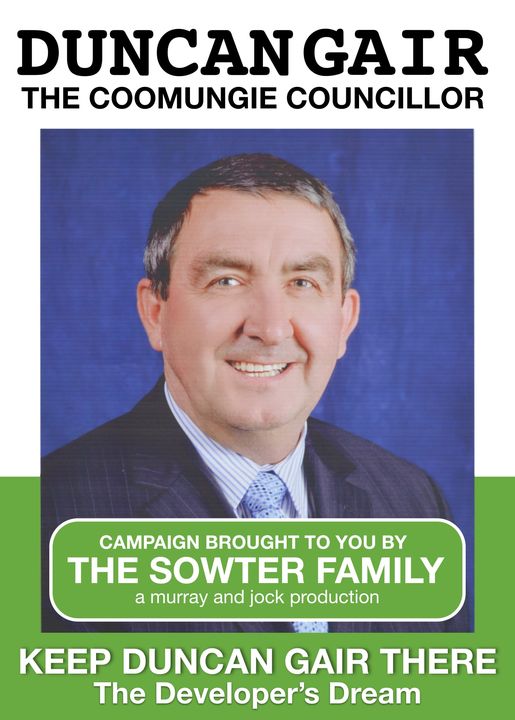