In 2016, and following the rigged council elections, I wrote a satirical song about Garry Turland being a corrupt councillor.
Garry and his crooked lawyer, Malcolm Murray, knew they had to stop me from further exposing Turland’s corruption, so Murray initiated a defamation action against me.

The litigation was illegal.

At the time, Garry and Malcolm knew it was unlawful for Turland to sue me for defamation in his official role as councillor. The council’s zero tolerance to corruption policy meant the defamation action would have to be addressed by the councillors and senior managers in open council, and Garry couldn’t afford to let that happen.

He had to make sure the illegal litigation never went on record, and so he sued me as a private citizen.
And even though I’d called the councillor a crook in the public domain – in his official capacity – Garry chose to sue me in secret.
It was a deep, dark secret he would keep from the council and the community for 6 years, right up to the present day.

By mid 2018, I’d been complaining about the illegal litigation for nearly two years. I’d written to the council GM, the Manager of Governance, all senior managers and every single councillor. Nothing happened. The whole council was part of the criminal conspiracy to shut down me down. They intended to ignore me no matter how much I complained, and no matter how much evidence I provided.

I then started contacting government officials, including Wendy Tuckerman, Nathaniel Smith, the Minister for Local Government, ICAC and the OLG. Again, nothing happened. I was totally ignored.

Out of sheer frustration, I wrote to the Golden Girl of Bowral, Heather Turland – Garry’s wife.

I complained bitterly to Heather about being stitched up by her husband as part of an illegal defamation action. I told her, “Get your husband to pull his head in. He’s currently destroying my life, and I’ve now got overwhelming evidence of his corruption.” I also told her numerous times that her husband was going to jail.

But still nothing happened, and just like everybody else, Heather ignored me.
And this is where the whole saga took an incredible turn.

After two years of suing me as a private citizen, Garry was forced to take the matter to council. He wasn’t happy with me contacting his wife and “making threats”, as he liked to call it. So without thinking, he forwarded the letter I sent Heather to all the councillors and senior managers at Wingecarribee Shire Council.

“This is the type of abuse I’m suffering at the hands of Adam Greenwood,” Turland reputably said in the covering email. “You see what I have to put up with? You see?” The correspondence was sent to councillors and managers from his official council email account.

But Garry had stuffed up badly. For years he’d sued me in private, and now he was bringing a private matter before the council.
According to councillor code of conduct regulations, elected officials are forbidden from raising private matters at a council level. Council meetings can only be used to conduct council business.

Apparently, Malcolm Murray was not happy at all. “Garry, you can’t share private correspondence with the councillors and senior managers,” he allegedly said. “We’ve got to keep the defamation action under wraps. Heather’s letter could be leaked by one of the councillors, and Adam Greenwood could use that as part of his defence.”

Turland had to act quickly. He needed to silence all the councillors and senior managers from talking about Heather’s letter, and he needed to do it with a legally binding document.

So he came up with the attached statutory declaration. And with veiled threats, Turland bullied all council officials into signing it, and without question, they all signed on the dotted line.

All except Ian Scandrett, who leaked the document numerous people including me.
Now, Scandrett’s just as crooked as the rest of them, and his failure to sign the document had nothing to do with acting lawfully or with integrity.

It was pure politics.

Councillor Scandrett was the victim of council witch-hunt at the time. He’d refused to get on board the whole Station Street Upgrade development, and he was suffering a constant barrage of criticism in in the media and in open council.
He simply refused to sign the stat dec because they were being mean to him. And because of politics.
This enraged Garry Turland cause Garry always got what Garry wanted. For the next two months of council meetings, he applied pressure on Scandrett to sign the document. It was blatant bullying and intimidation, and it was happening in the public domain.

Here’s some examples –
At a council meeting on 27 June, 2018 (the same day Turland handed the stat dec to all officials), Scandrett asked a question about councillor conduct.

“(Can) staff confirm if the statutory declaration handed to all councillors in the business paper briefing early today was in fact business of council, and if so, was it was examined prior to the meeting by the staff and the general manager?” Or words to that effect.

Scandrett went on to say, “If the staff and the GM had no knowledge of the document being tabled, then how was the distribution allowed?” He then referred to a report by a legal firm that had obviously provided council officials with updated rules and regulations regarding councillor conduct. He was alluding to the fact that Turland had violated code of conduct regulations.

Remembering, Garry Turland had individually delivered the stat dec to every councillor and senior manager prior to the meeting on June 27. He had no authority to do so, and it was against the law.

On 11 July, the bullying began (as per the meeting minutes).
“Councillor Turland indicated to Council that Councillor Scandrett is the only councillor who has not yet signed the declaration and asked when he intends to do so.”

This one statement from Turland confirms that all councillors were part of a conspiracy to cover-up Garry’s corruption.
Scandrett “questioned the relevance of the question as it was determined to not be a council matter”.

Boom. Scandrett confirms the stat dec is a private matter, and to bring it before council was unlawful.

On 25 July, Turland continued with the intimidation by referring to the previous meeting in which Scandrett had refused to sign the stat dec, and asked him if he was now willing to sign.
Scandrett ignored him.

On 8 Aug, Turland kept at him. “Is Clr Scandrett prepared to sign the statutory declaration?”
Scandrett declined to answer.

On 22 Aug, Turland literally repeated himself, “Clr Scandrett hasn’t yet signed the statutory declaration and asked Clr Scandrett if he was prepared to sign it now?”

Scandrett declined to answer, “and advised that this is not the business of Council.”

On 12 September, Garry was getting desperate. As per the minutes, “Clr Turland referred to Business Arising on page 4 and advised that he had asked Clr Scandrett on 3 occasions to sign the Statutory Declaration (in fact, it was 4)”. He went on to say that “Clr Scandrett had never provided personal and confidential information to the media and the general public. Clr Turland stated that it was (indeed) the business of council (regarding the stat dec and the letter to Heather Turland) and asked Clr Scandrett if he would sign the statutory declaration as he was the only one who had not signed it.”

Boom! For the first time in two years of litigation against me, Turland admits the defamation action was the business of council.
Scandrett’s response was as follows – “(He) advised that there was a continual pattern of questions to him about matters that were not the business of Council and that, in this particular case, the matter related to an email forwarded by Clr Turland and it was not a matter of council. He stated that it was not a matter that he should be called out publicly on, as it related to a personal matter of Clr Turland. He asked if the matter could be brought out in the minutes, and he stated again that it is not part of Council.”

And yet, Turland was adamant the matter was council business, and he was correct. Scandrett, on the other hand, stated that the matter was private, which was also correct, because Turland had chosen for the matter to be private up until it was convenient for it to be a council matter.

For two years, Turland had kept the defamation action a deep, dark secret.

But the moment I dragged his wife into the situation via correspondence, Garry all of sudden wants the defamation action to be a council matter as per the Statutory Declaration.

Such conduct is abuse of power by an elected official, and because the abuse occurred over a number of council meetings, it then constitutes systemic corruption (according to the ICAC Act of 1988).

Garry had committed a crime, and it’s all on public record.

At the next council meeting, Turland decided to send one of the other crooked councillors into bat.

Graham McLaughlin was a bit of a dolt and that’s why he was a Turland stooge. He went along with everything Garry asked him to.
Once again, Clr Scandrett was adamant in his response to McLaughlin – “(He) asked why this was not raised in Business Arising. He advised that the statutory declaration was from Clr Turland relating to an email sent by Clr Turland to staff and councillors on official council email, but it relates to a private matter that has nothing to do with council.”

Garry used his official email account to try and deal with a private matter in an attempt to cover-up allegations of his corruption.
Here’s some interesting aspects of the Heather Turland letter and the subsequent stat dec –
Even though Garry Turland was committing a crime by covering up my allegations of his corruption, none of the councillors or staff addressed the matter (except Scandrett). Councillors and staff are obligated by legislation to report corrupt conduct and behaviour. Therefore, all councillors and senior managers were complicit in Turland’s crimes.

Complaints about Turland’s illegal stat dec were sent to the general manager, Ann Prendergast, but she ignored them (a crime). Similar complaints to the Manager Governance, Danielle Lidgard, were also ignored (a crime). In fact, all complaints to councillors and senior managers were either whitewashed or covered-up, and the whole council was complicit in Garry’s corruption.

In conclusion –
In 2018, and out of sheer frustration, I contacted Heather Turland to complain about her husband’s malicious and vexatious court action against me.

Garry wasn’t happy about me contacting his wife, so he leaked the letter I wrote her to all councillors and staff.
By sharing the correspondence, Garry abused his position as a councillor in an attempt to silence one of his critics, namely me.

After being told the error of his ways by his crooked solicitor, Malcolm Murray, Turland was forced to have all councillors and senior managers sign a stat dec that would forbid them from saying anything about “Adam Greenwood’s” allegations of his corruption.

Apart from Clr Scandrett, all councillors and staff signed the stat dec, thereby keeping secret any allegations of corruption against Garry Turland.
Numerous lawyers have stated that Turland’s statutory declaration was not legally binding.

The document would’ve been ineffective in silencing people from speaking out.

But it proves once and for all that Garry Turland is guilty of long-term systemic corruption.
Signed,
Adam Greenwood
Ph: 0409 871 763 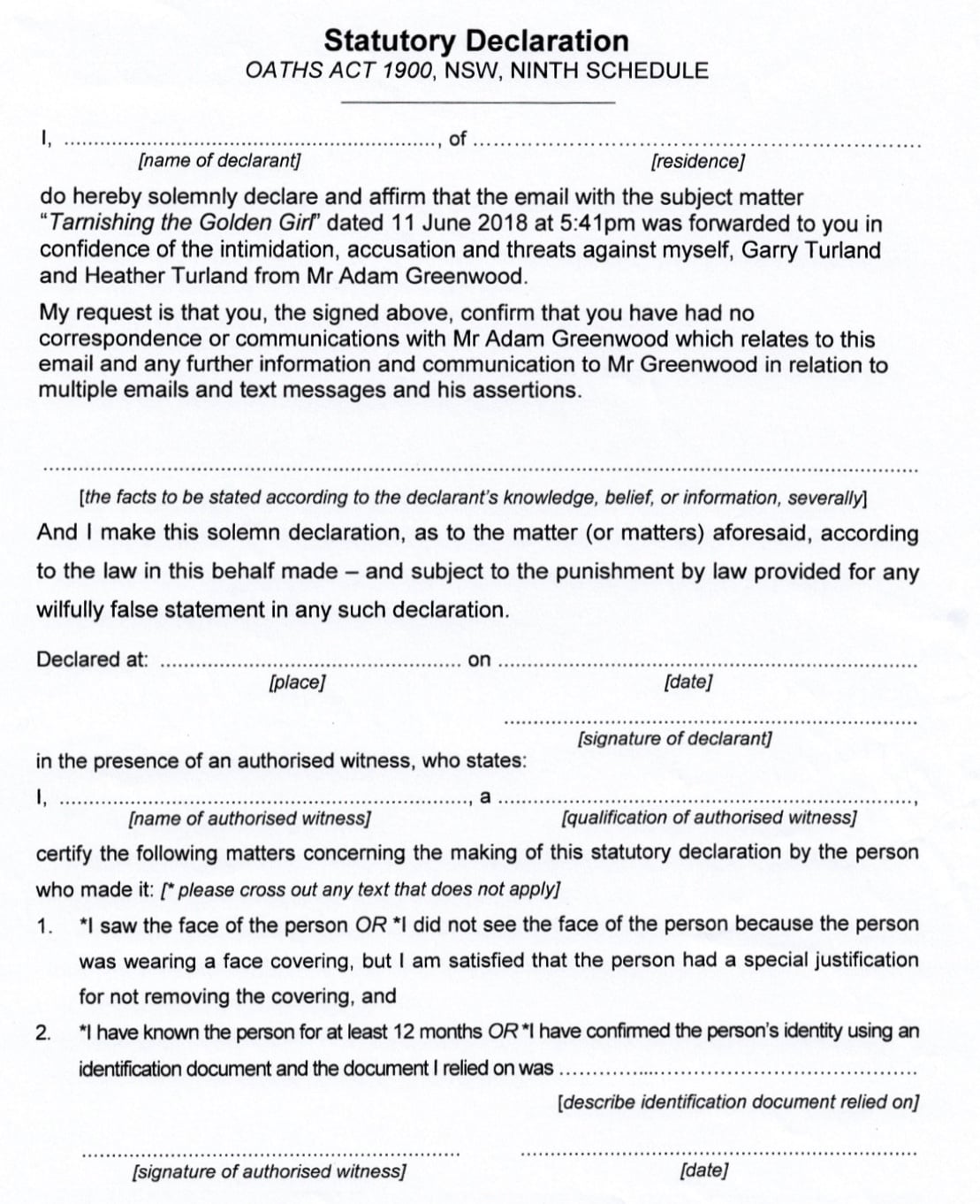 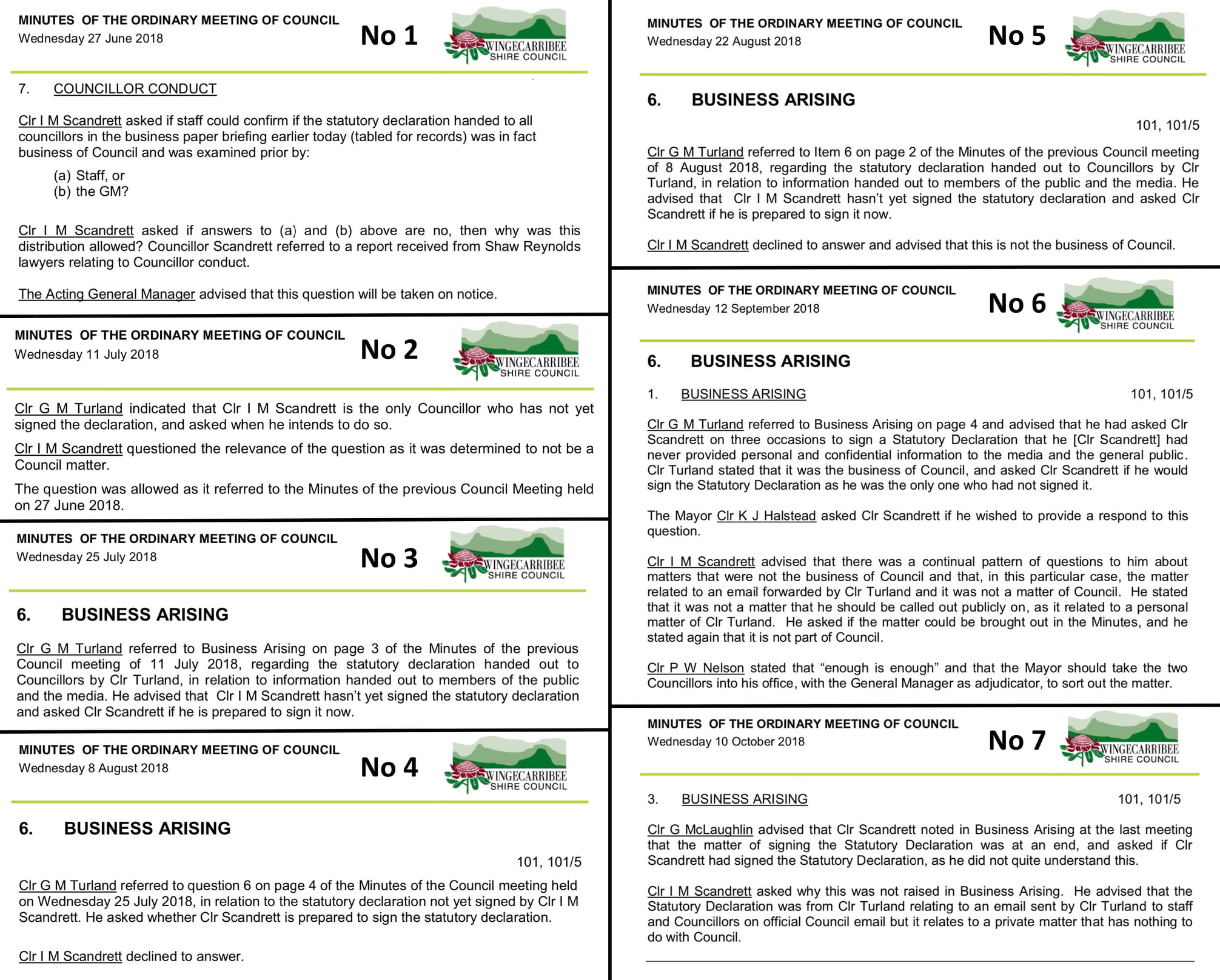