SHAT ON BY TURDLAND
Special Hearings Report by Raymond Curr
A soon-to-be-sacked councillor is making a mad dash effort to pin dirt on another disgraced councillor after he was thrown to the wolves at the public hearings.

At a recent session before the commissioner, Garry Turland savaged Ian Scandrett’s character when he accused Scandrett of long-term corruption and racketeering.
e.g. viewtopic.php?t=1760

According to one witness at the proceedings, “Garry used a scatter gun approach when blaming numerous other councillors of wrongdoing. He pointed his weapon at John Uliana to start with. Then he moved on the Juliet Arkwright. But in the end, he saved most of his ammo for Ian Scandrett, and boy did he give it to him with both barrels.”

Scandrett and Turland were first elected councillors in 2012. Over the next two years, they had a very close relationship. Some time in 2014, the pair had a major falling out, and for the next 4 years, Garry pursued Ian as part of witch-hunt. Along with his trusty sidekick, Charlie Johns, Clr Turland did everything in his power to destroy Scandrett’s political career.

“Garry was conducting a similar vendetta against Uliana at the time he went after Scandrett,” said a former council insider. “Turland didn’t like people defying him, and when Ian broke ranks, Garry was ropable. When people piss off Clr Turland, he goes after them.”

Even though Turland subjected Scandrett to four years of bullying and abuse, the pair became close again after Clr Turland had a major falling out with Clr Gair.

According to a former senior manager, “When Garry fell out with Duncan, he lost control of the council. Scandrett was banished to the wilderness at the time, and Garry had no other option but to again join forces with Ian – and also Kenny Halstead.”

Another former official had this to say, “Ian would jump into bed with Adolf Hitler if it was beneficial to his political career. It’s no surprise he quickly forgave Garry for past abuse, Ian was still hoping to be mayor one day.”

A number of prominent community members have contacted the author to confirm that Ian is doing the rounds. One council candidate stated, “Ian contacted me by phone out of the blue, and without much preamble, he asked me for dirt on Garry Turland.”

The candidate was happy to give Ian all the information they had in their possession.

Clr Scandrett has till 9 May to come up with the goods on Clr Turland.

According to one former councillor, “There’s still more fireworks to come 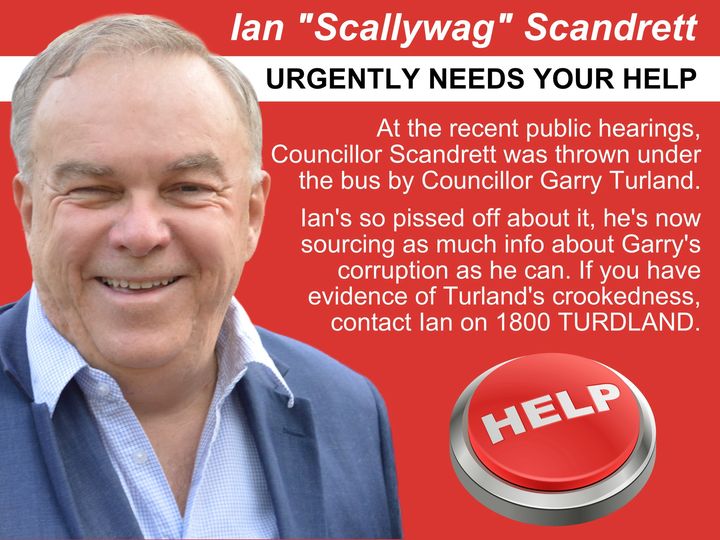