Cristian King ✡ the fraudulent editor of LattéLife newspaper is up to his old dirty tricks.

On Friday, 11 January, I was served with an AVO by Senior Sergeant Matthew McCarthy of the Southern Highlands Police Division. The AVO was initiated by Cristian King, after I exposed him and his mother, Jane, for long term entrenched corruption. This is the fourth time I’ve been served with an AVO by crooks (albeit, via the police force). When people like the Kings are exposed for wrong doing, they use the courts to try and muzzle the whistleblower.

What they never do is – they never address the serious allegations of corruption I level at them.

That’s because I’ve got the evidence, and there’s no way for them to wriggle out of it.

Cristian King has made a big boo-boo in taking out an AVO against me. Crissy and his mum have made false and misleading statements to the police (and the court), and this is a very serious crime. As of October, 2014, making a false AVO complaint is a criminal offence and carries maximum penalties of 12 months imprisonment and/or a fine of up to $1000.

What makes it worse for Cristian, though – he’s a Justice of the Peace.

According to code of conduct and integrity regulations, “A justice of the peace must not engage in dishonest activities or conduct himself or herself in such a way as to bring the office of justice of the peace into disrepute”. Cristian King has made a false report to the police, and by doing so, he has attempted to pervert the course of justice. This added offence carries a maximum penalty of 14 years incarceration. As a justice of the peace, Cristian is required to have an even more heightened sense of what’s right and wrong.

Lying in a police statement is illegal, and Cristian knows that better than anyone.

Along with the proof I have of Cristian’s attempt to pervert the course of justice, is further evidence that proves he has no problem lying to a court of law.

At the beginning of 2018, and in dispute with “another” ex-employee, Cristian sued the former journalist for $600. In Cristian’s statement of claim to the court, he claimed that a company phone the ex-employee still had in their possession, was the property of LattéLife. Apparently, the King Media Group never ”gifted” the phone to the former journalist, and via a court case, they wanted the smart phone returned forthwith.

Trouble for the Kings (at the time), I had evidence that the phone HAD been gifted to the former employee, and I had it in writing – from Jane King herself.

Once the Kings found out that there was evidence of Cristian lying to the court, they suddenly negotiated a quick settlement, and made sure the settlement was confidential. Jane and Cristian didn’t want the public to know about their attempt to pervert the course of justice.

I’ve now got evidence of the Kings making a false and misleading statement to the court – twice!

Here’s the Kings most recent attempt to mislead the court (regarding my AVO).

As part of the application for an AVO, the Kings officially stated for the record that I finished working for LattéLife in December, 2016. This is a bald faced lie, and I have hundreds of emails and messages that prove I was working for the Kings right up until October, 2017.

In fact, at one stage, I was living on their property at Goulburn while working for the family business.

There’s a number of messages in the comments below that prove I was working as a paid employee for LattéLife.

The messages from 2017 were between myself and the advertising manager, Toni Whitelaw. They clearly show that Toni was calling on me to do artwork for advertisements – while also asking me to take part in distribution (like I’d done numerous times before).

The last message occurred on 23 October, about a week before I finished up with LattéLife. In a recent Facebook post, Jane King (pretending she was Toni Whitelaw), stated for the record that I never had anything to do with the paper’s distribution.

This is a lie.

As you can see in one of the comments, Toni Whitelaw was instructing me to distribute the paper throughout Bowral and Mittagong on 20 October, 2017 – 11 months after Cristian and Jane King claim I finished working for their business.

There’s also plenty of emails and messages between Jane King and myself during that time, that prove beyond a reasonable doubt that I was – indeed – working for the Kings throughout most of 2017.

The Kings have lied to a NSW Court as part of an application for an AVO. If they’re in the right and I’m in the wrong, why on earth do they need to make false statements?

The Kings lie because LattéLife has been ripping off contributors and employees for 10 years. I’m one of the victims, and the Kings have reneged on paying me nearly $5000. They’re now trying to silence me from speaking out against their corruption.

I’m going to fight the AVO application by pointing out to the magistrate that the Kings have made a false and misleading statement to the court. “If they have a legitimate grievance that warrants an AVO, Your Honour, why would the Kings have to lie and deceive the court (and the cops) as part of the application for the AVO?”

If the court action does make it to a hearing, I’ll be questioning the Kings under oath as to why they have lied in a statement to the police and the court, while producing documentary evidence that proves my assertions.

I also worked with Emily King during 2017 (including with the distribution of the paper). Emily is the daughter of Jane, and sister of Cristian. I’ll be subpoenaing Emily and questioning her under oath, confirming the fact that I did indeed work for LattéLife throughout 2017. Emily will also be able to confirm that I lived full-time on their property at Goulburn for three months, working alongside the whole family as we went to print every edition.

The next person I’ll be subpoenaing is Toni Whitelaw. I’ll ask her under oath, “Why have the Kings stated that I stopped working for LattéLife in late 2016, when you know full well I was working for the Kings throughout 2017? After all, I have messages and emails from you requesting me to do work for the paper. Would you have the court believe I was working for free, and that I wasn’t in their employ?”

I’ll also be asking Toni why the Kings recently stated that I never did distribution, when she sent me a message in October, 2017, requesting me to do exactly that.

The last person I’ll be subpoenaing is the ex-employee who was forced to suffer the ignominy of a court case and defend the fact they’d been gifted an iPhone (as part of their contract termination). I’ll be asking the ex-employee to confirm that Jane King sent me a message that confirmed the iPhone was indeed a gift, and that the statement of claim (as per the court case at the time) was based on fabrication and deceit.

The likely response from the Kings will be – Adam Greenwood is a disgruntled employee, a nutcase, a crackpot, and someone who’s got mental health issues. They’ll then attempt to lie their way out of my accusations while disparaging my character and integrity.

This is par for the course when it comes to crooks in this town.

They all sing from the same songbook …

If any community member has further information about the King’s corruption (or any other corruption, for that matter), please contact me on 0409 871 763 or email [email protected]

Check out the comments below for documentary evidence and pictures of when I was living with the King family and working for them part time. I’ve written a story for every photo, showing that I was accepted into the family and work place as a valued employee and “so-called” friend. 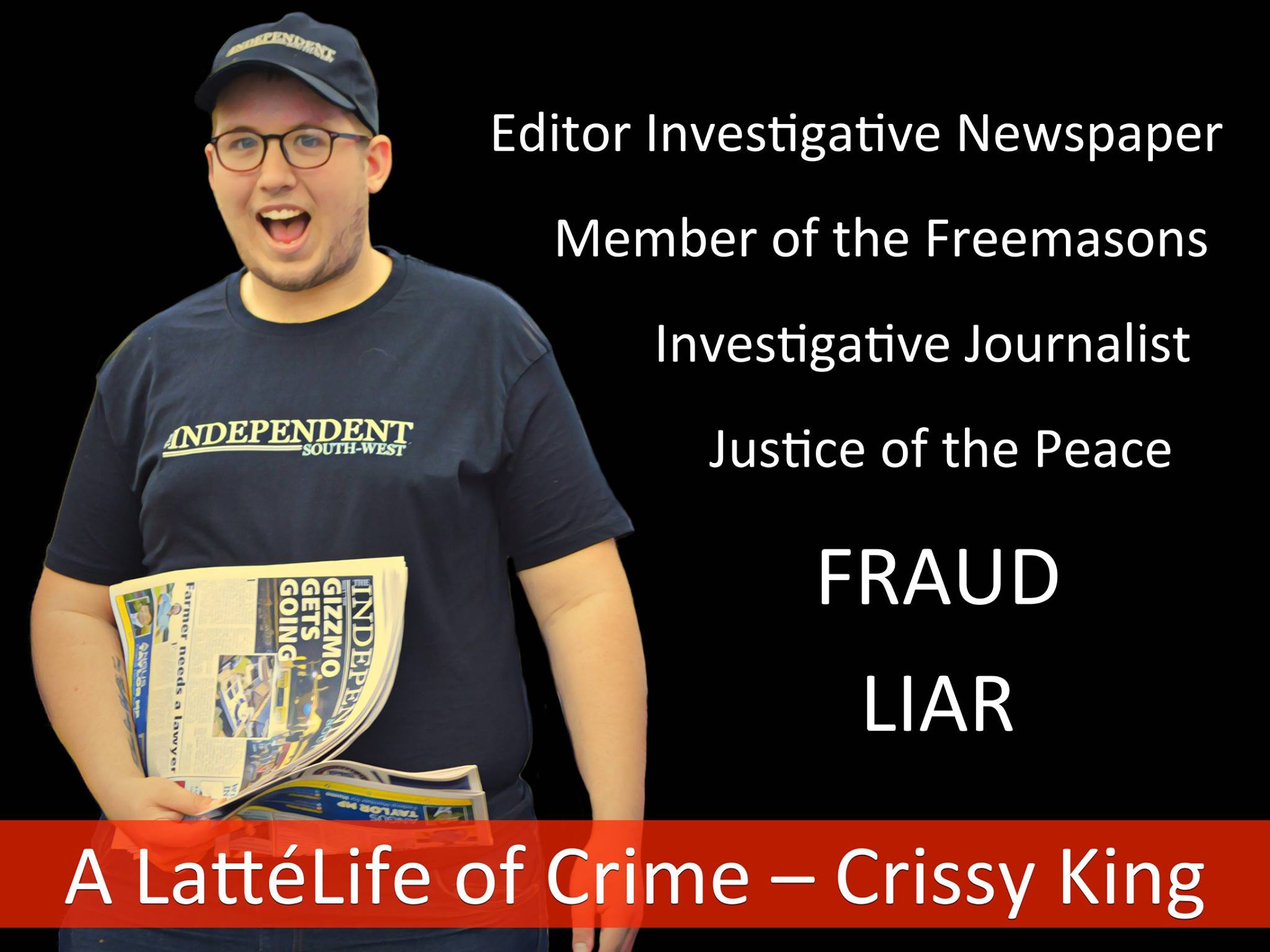 Re: Cristian King the fraudulent editor of LattéLife newspaper

Just another criminal Zionist Jew.. Southern highlands is full of them running the show.