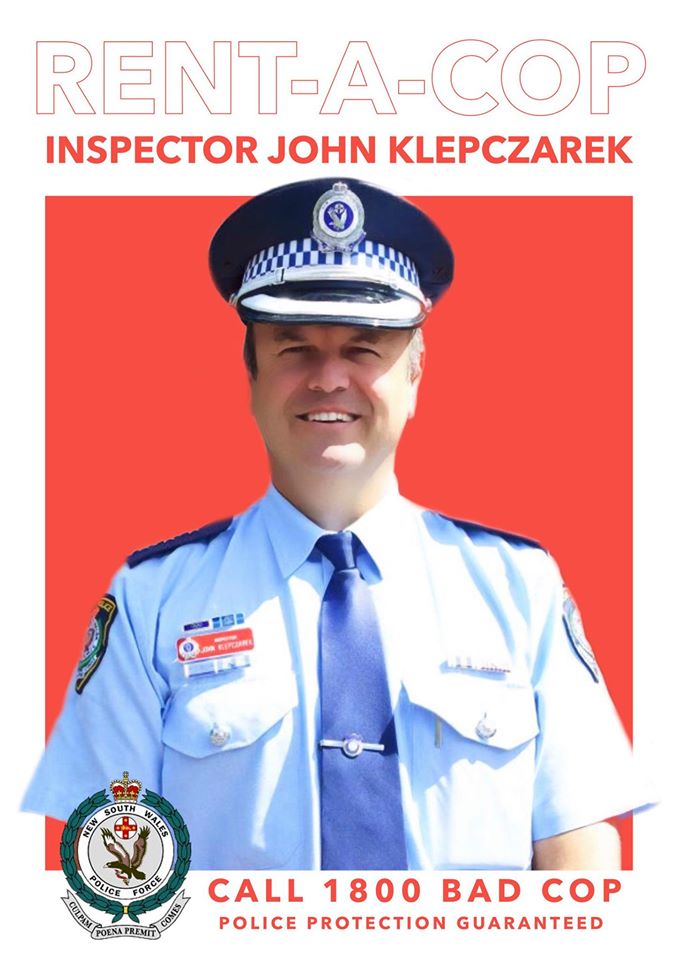 Supt John Klepzcarek,
Corrupt Commander,
Monaro Police Division,
8 Farrar Place,
Queanbeyan. NSW. 2620.
Superintendent Klepzcarek,
I’m writing to let you know about a very important development.
I’m currently making a submission to the Wingecarribee Shire Council Public Inquiry about your long term entrenched corruption as a senior officer with the NSW Police Force. I’m going to be letting the commissioner know you’re a criminal, and I’m going to provide him with undeniable evidence that you’re guilty of a conspiracy to frame me for crimes I didn’t commit in an attempt to protect corrupt councillors at WSC.

I’m happy to say that I’m not the only person making complaints about your criminality.

There are honest, upstanding police officers at Hume Division who are also making submissions to the inquiry about your corruption. A number of those officers have contacted me privately, and they’ve confirmed that you did indeed stitch me up with fabricated charges and fraudulent convictions.

In fact, not only did you fail to act on any of the complaints, you purposely covered them up.

Fortunately for the communities of the Southern Highlands and the Snowy Mountains, your protection racket won’t last forever, and even if the dozens of complaints I end up making to the inquiry are not properly investigated and acted on, there will be a change of government in the very near future, and this will be your ultimate undoing.

You’ll be going to jail.

Even if a new state government fails to act on your long-term entrenched corruption – for whatever reason – I just want to make something absolutely clear.

I’ll be spending the rest of my life putting you in jail.

I’ve spoken to numerous people who are also victims of your corruption, and while you may have silenced a majority of those people from speaking out due to threats, intimidation and bullying, you haven’t been able to muzzle me (although you’ve certainly tried a number of times as part of a criminal conspiracy).

You’ll never will be able to shut me up, I assure you.

I’ll be calling you a criminal in the public domain for the rest of your career as a police officer; for however long a career you have in the private sector; all the way through your retirement, and right up until the day you die.

I will not rest until you are investigated, charged, convicted and jailed for your crimes against numerous communities in NSW.

I’m more than happy to suffer police harassment by you and your crooked counterparts. But I must warn you – there are good, honest officers at Hume who are sick of your long-term corruption, and they’ll do anything in their power to thwart the potential harassment you might have in store for me – as part of your continued attempt to illegally shut me down.

I’ve been guaranteed this support by a number of serving officers who once worked under your command. They reckon you stink to buggery.
If you take out an AVO against me that forbids me from confronting you and exposing your criminality in the public domain, I will fight the order at the local court, at the District Court, and even at the Supreme Court, if necessary. At every court appearance, I’ll be calling you out as a criminal, and I’ll be doing it loudly and assertively. At the same time, I’ll be providing the court with overwhelming documentary evidence of your corruption.

If, by chance, you’re successful in taking out an AVO against me, I’ll patiently wait the two years the order is in place, and the moment it’s lifted, I’ll start calling you out as a criminal again. I’ll then use all of my amazing talents and abilities to continue shaming you as a dirty, bent cop.

Incidentally, one of the crooks was a very close associate of yours, and when you framed me for crimes I didn’t commit, you did so at his behest. Basically, you were being paid bribes by this crooked councillor/developer, and that’s why you had to stitch me up on fabricated charges involving the dead criminal, Charlie Johns.

The evidence is overwhelming and undeniable, and it can now be backed up by honest officers at the Southern Highlands Police Station.
Not only have you menaced and bullied civilians over the years who have complained about your corruption, you’ve destroyed the careers of honest police officers who have dared hold you to account from within the force itself. I’m now in regular contact with a number of these former officers, and their stories are horrific.

You’re an absolute disgrace to the NSW Police Force, and you’re a disgrace to all members of the force, both past and present.
I’m delighted to say that a number of investigative journals have started, or are about to start, reporting on my case. In fact, I was part of an interview yesterday in which I called you out as a dirty cop. By name. The interview will be published in the coming weeks.
You been suffering from a serious misapprehension. You’ve had this belief that by framing me for bogus crimes, you’d silence me from speaking out about you being a crooked cop.

Wrong.
I’m going to be shouting from the rooftops about how you’re the lowest form of criminal.
In fact, you’re worse than the elite kosher rapists, murderers and pedophiles that you protect.

The State of NSW entrusted you to maintain law and order based on honesty and integrity, but instead, you’ve flagrantly abused your position for personal gain, while destroying the lives of people who got in the way of your greed and avarice.

You’re a bottom feeder when it comes to criminality, and when you finally go to jail, they’ll be placing you in protection within protection. That’ll be for your own good. You wouldn’t last a day in mainstream prison, and you wouldn’t last all that long in segregation either. They’ll have a special section for dirty cops like you.

I’ve been calling you a criminal on my Facebook page for years, and you’ve never once responded to any of my allegations of your corruption. A good, honest, upstanding officer would be horrified to be accused of being corrupt, and they would've respond with anger and rage at such serious allegations.

But I’ve never heard one peep out of you. And I’ve been calling you out as a dirty cop for years. I’ve written songs about your corruption; poems, and news reports. I’ve published videos and memes about your many crimes.
But you’ve never said a word in response.

Ultimately, this is the final evidence we need that proves you’re a crooked cop.

If you weren’t bent, Superintendent, then you’d be the first person to challenge my allegations of your corruption.
In fact, you’d be screaming blue murder in denial of my charges against you.

I intend to send this correspondence to all my contacts – including MPs, journalists, government departments, the LECC, the police commissioner, and of course, the Commissioner of the Wingecarribee Shire Council Public Inquiry. 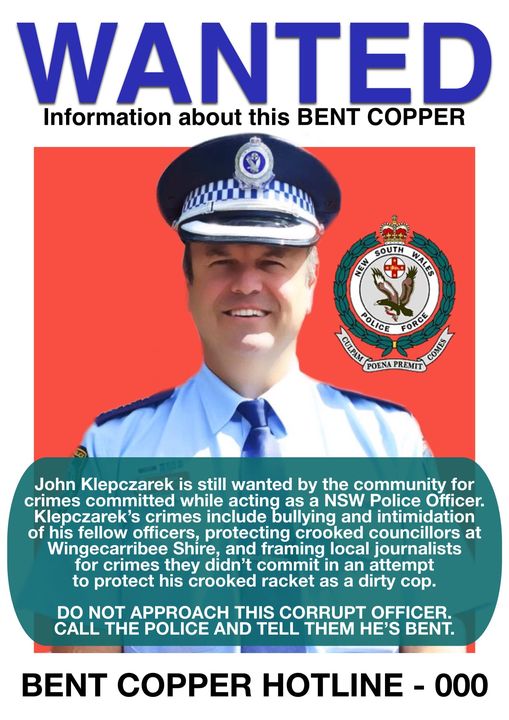 To the legitimate and honest officers of Monaro Police Division,

I’ve now been provided with more information about the criminal, John Klepzcarek, the commander of your division.
As you may have heard already, Klepzcarek is a long term bent copper who has a certain modus operandi that enables him to maintain his corruption year after year.

Klepzcarek ensures that all his junior officers are dumbed down by bullying, intimidation and threats. He surrounds himself with officers who blindly obey his commands, and who won’t ever question the crimes he blatantly commits as a senior officer of the New South Wales Police Force.
If you’re an on officer who’s smart, articulate, honest, empathetic and a real go getter, then John Klepzcarek will destroy your police career, before he’ll ever let you make a positive contribution to the police service.

Klepzcarek has destroyed many an officer's career, those cops who grew suspicious of his dodgy conduct. He’s hounded long term officers out of the force after they refused to go along with his corrupt practises. And he’s devastated plenty of people’s lives – after they've invested many proud and honourable years as police officers.

Good cops of Monaro, John Klepzcarek is coming for you.

If you do things by the book and maintain the highest levels of integrity, then you’ll be disenfranchised by Klepzcarek. Suddenly your career will be going nowhere, and because you’re honest and above board, you’ll be treated like a pariah. You’ll also be banished to the internal leper colony within the force – the one that's on the other side of the thin blue line.

If you complain about Klepzcarek’s corruption – and that of other dirty cops like Matt McCarthy and Brendan Bernie – you’ll be bullied, intimidated, smeared, ridiculed and demoralised.
And, by the way, your complaints will go nowhere.

These types of dirty cops have the complaints system stitched up. In fact, by complaining about corrupt senior officers, you’ll soon become the person being investigated.
Klepto and Co will manufacture their own complaints against you, and you’ll suddenly be framed for something you didn’t do.
John Klepzcarek has been running this type of racket for decades.
He’s a criminal.
He’s also been recently promoted to superintendent, which is basically the rank and file members getting kicked in the guts by senior management. Up in Sydney they reckon you’re a bunch of morons, and if they want to promote a crook like Klepzcarek, they’ll bloody well do what they bloody well please!
And don't you dare speak out.
The rank and file members of the NSW Police Force make up 95% of the service.
Criminals like Klepzcarek make up the rest.
What’s the go with the Police Union? Why isn’t your union sticking up for 95% of the work force? Why isn't your union holding the 5% of crooks accountable?
It’s not just the the corruption and the kick backs. The bent coppers are destroying people’s mental health, their future, their careers and their lives. This is a major health and safety issue, and it goes way beyond cash being distributed in brown paper bags.
Where the hell is the police union when crooks like Klepzcarek are being promoted to superintendent, when there’s so much evidence of their long term corruption?

Why are all the good cops paying their dues to a union that turns a blind eye to widespread, entrenched corruption at the NSWPF?
And when is this thin blue line BS gonna end? There’s 95% of good, honest cops in the service. Your careers are being manipulated, marginalised, and in some cases destroyed, by a bunch of stinky, smelly cops. And only a handful of them.

How do 95% of you let this happen? How do you let it happen while policing the community at the same time?

In conclusion –
There’s now so much dirt on Klepzcarek, he’s most definitely going to jail.
Current and former officers at Hume are now in regular contact with me, and they’re ecstatic that someone’s finally speaking out against the likes of Klepzcarek, McCarthy and Bernie.

For the time being, the only help they can give me is information, but that information is vital. When the current crooked government is kicked out at the next election, a new government will address the thousands of complaints against Klepto and Co.
But you can never have enough dirt on the bent coppers. 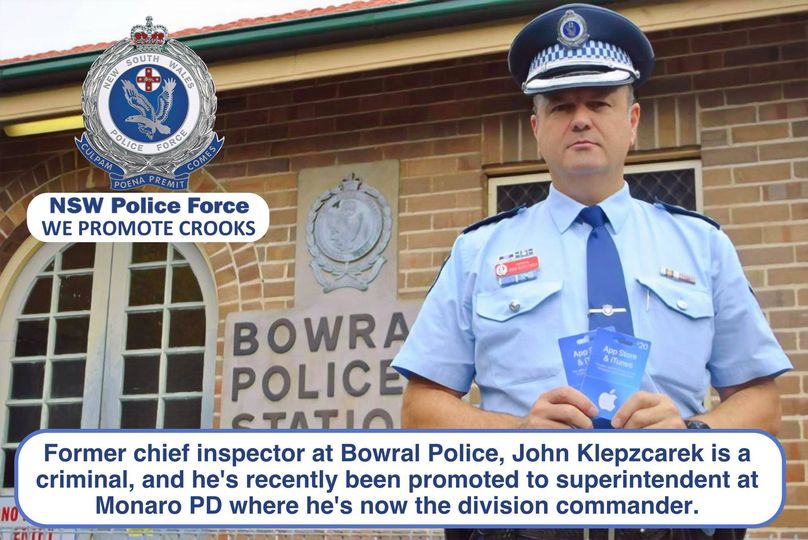