CHARLIE AND THE CROOKED COPS

CHARLIE AND THE CROOKED COPS

In December 2019, Mr Greenwood delivered a double whammy to Johns and a number of corrupt officers at Moss Vale Police Station. He released the Shady Bunch song – a parody that ended up going viral – and he started an online campaign that proved once-and-for-all that Charlie was a crook.

According to one insider, “(Inspector) Klepzcarek and (Deputy Mayor) Turland were having meltdowns. They needed to stop Adam (Greenwood) from making further allegations against Charlie, cause it could end up implicating them.”

Apparently the Shady Bunch parody sent alarm bells through the council and the Cop Shop, and Klepzcarek was forced to remind his officers, “any complaints against councillors and council officials are to be directed to me."

The chief inspector also reiterated that “all council officials should be sent to my office unannounced.”
As Mr Greenwood started posting more and more evidence of corruption by Charlie, the dirty cops were in a quandary. They’d already charged and convicted Adam twice for crimes he didn’t commit; having thought this should shut him up.
But he kept coming back for more.
Meanwhile, the whole council was ignoring the fact that Charlie, the right hand man of deputy mayor, Garry Turland, was attempting to stitch Adam Greenwood up in a criminal court – at the same time Garry was stitching him up in a civil matter.

Letters of complaint from Mr Greenwood about such a conflict of interest were ignored by the GM of the Wingecarribee Shire Council.
Further correspondence to the Manager of Governance (the overseer of council integrity) were ignored – no matter how much evidence of corruption Mr Greenwood provided.

Emails to councillors and senior managers complaining about the witch-hunt by Turland and Johns were also whitewashed and covered up.
And even magistrates at Moss Vale Court were part of the criminal conspiracy.

The bent coppers at Hume were forced to seek an amendment to the AVO, the one Johns had taken out against Mr Greenwood. They wanted the court to stop Mr Greenwood from further exposing Charlie as a crook online. They asked for a condition added to the AVO in which Mr Greenwood was forbidden from speaking about Charlie on social media. They were granted the added condition.

The AVO legislation clearly states that Apprehended Violence Orders must not be used to try and protect a person’s reputation.
But that’s what the crooked Hume coppers wanted to do.

Garry Turland and Charlie Johns had been paying protection money to Inspector Klepzcarek for years. It was time for their police protector to earn all those kickbacks.
Having already framed Adam Greenwood for crimes he didn’t commit, the inspector initiated further charges at the behest of Deputy Mayor Garry Turland.

The crooks had to shutdown Mr Greenwood, no matter what.
In February, 2020, Mr Greenwood was charged with breaching an AVO that had been initiated by Charlie Johns, Garry Turland and John Klepzcarek. It was an illegal AVO.

In March, 2021, Adam Greenwood was found guilty of the charges – even though Charlie had died six weeks earlier.
By that time, the matter had been transferred to Wollongong Court – at the insistence of Mr Greenwood – after he complained about being stitched up numerous times at Moss Vale Court.

Even though the hearing occurred in a different jurisdiction, Mr Greenwood was still found guilty of crimes he didn’t commit.
It’s all on public record.

Full Report by Barry Westinghouse.
Attached Screen Shot: One of Mr Greenwood’s many attempts to alert the public he was being stitched up by crooks. Sadly, nobody was listening – least of all officials at Wingecarribee Shire Council, ICAC, the OLG, the LECC, the LNP, the NSW Minister for Local Government and all other people in authority. 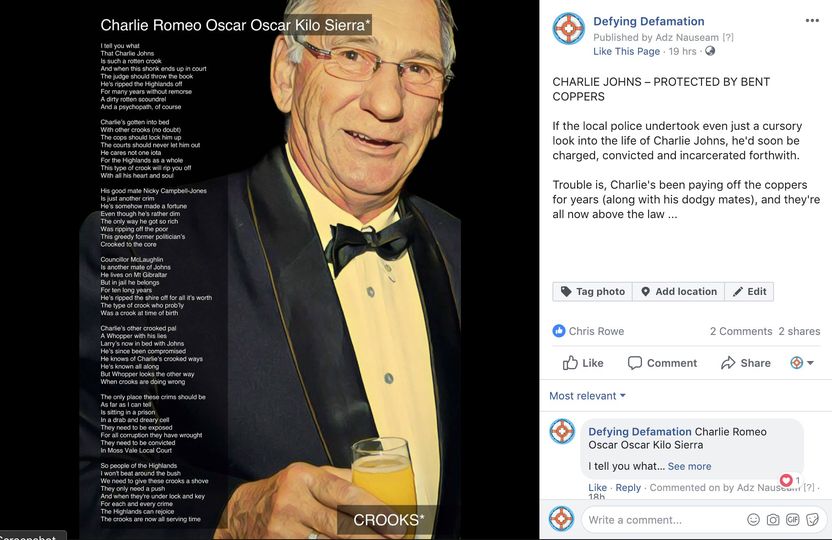