One of Duncan’s deepest, darkest secrets was the fact he was a wife basher.

The long-term Wingecarribee Shire councillor was always an angry drunk, especially when it came to women.

“They have their place in the home, and they bloody well do as they’re told – or else” is something Mayor Gair might’ve said back in the day.

Duncan’s abuse of his first wife was well known in the community at the time. It wasn’t so long ago that spousal abuse was something people turned a blind eye to. Especially in country towns like the ones that populate the Southern Highlands.

Sadly, wife bashing can be passed down from fathers to sons. When Duncan’s two boys were old enough, they joined in with the abuse.

One member of the community stated, “Duncan and his sons used to bash (the wife/mother), and then lock her in a cupboard so they could go out and party.”

Duncan’s abuse of women didn’t only occur in the home.

When the Wingecarribee Shire’s first female mayor was elected in 2008, she was invited to a special event. Duncan was invited, as well.
After Duncan became inebriated, he overhead the mayor make a joke at Duncan’s expense. It was a gentle dig that should’ve gone through to the keeper.

But she didn’t count on Duncan’s arrogance and misogyny. Quick as a flash, Duncan grabbed one of her arms by the elbow, and bent it up around her back until she was in intense pain.

“Don’t you ever say anything like that about me ever again,” he sneered threateningly.

The lady mayor went into shock. She’d never been attacked like that in her life.

And the incident left the mayor with quite a dilemma.
If she complained to police about the assault at the beginning of her tenure as mayor, it could become the focus of her entire term. It could distract from all the wonderful things she wanted to do as the mayor and as a councillor.

She had to make a choice.
Should the mayor have Duncan convicted for a crime (the assault was witnessed by numerous people in the room who were willing to appear in court on her behalf)?

Or should she pretend it didn’t happen for the sake of the council – and the community (otherwise the ensuing court case might detract from the role of the council)?

She decided to not press charges.
Duncan’s first wife, however, did press charges. But she was coerced into having the charges dropped “for the sake of the kids”.

She did end up taking out an AVO against Duncan, and that’s still on public record.
So are the assault charges.

In 2016, Duncan Gair sued Adam Greenwood for defamation because the journalist allegedly harmed his reputation.
But at the same time he was suing Adam, there was a deep, dark secret lurking in the background.

Duncan Gair was a wife basher.

And when he got drunk and angry, he used to lay into his missus.
All the time and in front of the children.

The attached meme was published by Adz Nauseam and Defying Defamation in November, 2019.
The publisher of both Facebook pages didn’t have enough evidence in 2019 to accuse Duncan Gair of being a spousal abuser.

But there’s now overwhelming evidence from witnesses that Duncan Gair used to bash his wife.

For years, the Wingecarribee Shire Council turned a blind eye to bullying and intimidation, similar to the treatment Gair and Paull meted out to the women who got in their way.

It was a typical boys club – women were beneath them.
Special report by Ronnie Hargreaves 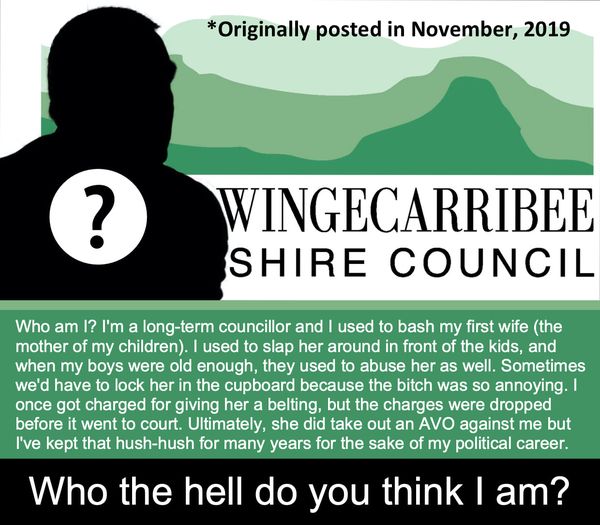